Types of Hurricane Damage to Expect During and After the Storm

There are a couple types of hurricane damage you can expect whenever you’re anticipating one of these powerful storms.  Below we list a few of them. 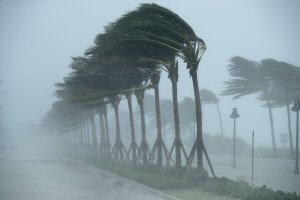 Wind is responsible for much of the structural hurricane damage. High winds uproot trees and tear down power lines. The maximum winds from fast moving and powerful storms may remain high, even when the storm is well inland. Often this is actual wind speed combined with the speed of the storm.

The heavy rains associated with a tropical weather system are responsible not only for major flooding in areas where the storm initially strikes, but also can affect areas hundreds of miles from where the storm originally made landfall.

During landfall, it is not uncommon for 5-10 inches of rain to fall. If the storm is large and moving slowly, rainfall could be even more excessive. Intense flooding also can occur from tropical depressions and storms that do not reach hurricane strength.

Storm surge is a rapid rise in the level of water that moves onto land as the eye of the storm makes landfall. Generally speaking, the stronger the hurricane, the greater the storm surge.

As a hurricane approaches the coast, its winds drive water toward the shore. Once the edge of the storm reaches the shallow waters of the continental shelf, water piles up. Winds of hurricane strength force the water onto shore.

At first, the water level climbs slowly, but as the eye of the storm approaches, water rises rapidly. Wave after wave hits the coast as tons of moving water hammer away at any structure on the coastline.

The surge is greater if a hurricane’s track is perpendicular to the coastline, allowing the surge to build higher. The storm surge is also greater if the storm affects a bay or if it makes landfall at high tide. The greatest storm surge occurs to the right of where the eye makes landfall.

Tropical cyclones also can trigger tornadoes. Each storm has a unique pattern of tornadoes whose frequency and occurrence is highly variable from one storm to the next.

Tornadoes spawned from hurricanes are more likely during an intense hurricane or one that is intensifying at or near landfall.