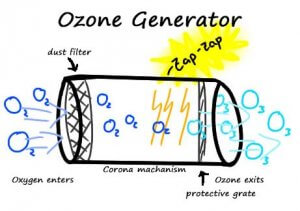 Here is a simplified graphic of how ozone generators work.

Ozone is triatomic oxygen or enriched oxygen. Rather than having two atoms like in the oxygen we breathe, ozone has three bonded oxygen atoms. It is a strong oxidizing agent as well as a sterilizing agent most commonly used in fire restoration to eliminate smoke odors. We at SERVPRO Ft. Lauderdale North use machines known as ozone generators to produce the gas.

The machine uses a high voltage corona mechanism to emulate the same conditions that would allow ozone to form in nature (such as lightning).  Regular oxygen from the air goes in, ozone comes out and can then be directed wherever it is needed.

Some examples of what can be deodorized with ozone are odors associated with:

However, ozone is less effective on inorganic odors (meaning odors not derived from living matter) such as:

The reason for this is because the third oxygen molecule bonds with the organic odor compound and oxidizes it. The ozone then turns into regular oxygen and eliminates the smell by breaking it down at a vastly accelerated rate compared to standard oxygen. Oxygen molecules have trouble bonding with and oxidizing inorganic compounds, making it less effective on them.

There are very little drawbacks to using ozone generators in fire restoration jobs, if used correctly and as mandated by OSHA. Ozone is converted back to oxygen in a matter of minutes, so rooms or buildings only need to be evacuated for a short period of time.

Remember to not use any ozone generators on your own and call in only qualified professionals like our team at SERVPRO Ft. Lauderdale North to deal with smoke odors.